Bitcoin (BTC) is a decentralized digital currency originallyô described in a thesis paper inô 2008 and launched in 2009 by pseudonymous ô computer programmer Satoshiô Nakamoto. Bitcoins have real-world value and can be traded or exchanged forô almost any world currency, as well as an increasing number of goods andô services. 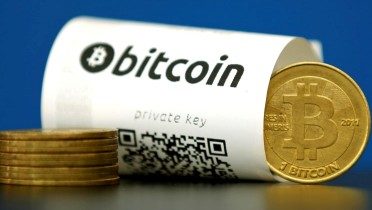 The production of Bitcoin and rate of introduction into the Bitcoinô economy is governed by an open-source program (the ãBitcoin Protocolã) designedô to decrease Bitcoin production by half every four years until 21 million Bitcoinô are produced in the year 2140, at which point Bitcoin production willô permanently stop.

The Bitcoin network operates on a peer-to-peer platform whichô is powered by its users. It is not owned or operated by any central authority or network, and is not directly regulated by any government[1].ô There are two ways to acquire Bitcoin: by purchase or by mining. Bitcoins canô be purchased online ô using a number of online brokers and exchanges. Bitcoinô mining requires the miner to contribute significant ô computer processingô resources (and electricity) to the Bitcoin network in order to facilitateô Bitcoin transactions and maintain the security of the Bitcoin network. Whereasô banks and credit card companies facilitate credit & debit transactions,ô Bitcoin transactions are facilitated by a vast peer-to-peer network of individualô miners.

[1] Although Bitcoin isô currently unregulated, the US Government has made recent efforts to regulate theô Bitcoin economy by requiring brokers and other Bitcoin intermediaries to complyô with recordkeeping and reporting responsibilities ô required by the Financialô Crimes Enforcement Network (FinCEN).

Bitcoin payments are made to Bitcoin addresses (ãpublic keysã) which are represented by an alphanumeric string about 33 characters in length and are associated with a ãprivate keyã contained in a secure, software-based Bitcoin ãwallet.ã Bitcoin wallets are used to store, receive, and transfer Bitcoins. A Bitcoin address and its associated private key are linked using cryptography.

The private key proves a personãs right to spend Bitcoin from a specific Bitcoin address through cryptographic signatures. The public key is a reference point for Bitcoin miners to verify transactions, but only the owner of a Bitcoin wallet has access to the private key which must be used to complete a transaction. Multiple Bitcoin addresses can be generated by one person and it is recommended for security purposes that Bitcoin users generate a new Bitcoin addresses for each transaction made.

Bitcoin is Not Entirely Anonymous

It is widely stated that Bitcoin addresses are anonymous, but they are in fact pseudo-anonymous. While no personal information is connected to any Bitcoin address, data on all Bitcoin transactions is permanently stored on a ãpublic keyã and can be viewed by anyone. Some Bitcoin transactions require buyers/sellers to provide some personal information. For example, many Bitcoin Exchangers requires significant verification (including bills containing a verifiable address) for members of its exchange. However, enhance anonymity can be achieved by using a different Bitcoin address for each transaction. (Bitcoin.org/en/you-need-to-know)

This public key functions as a reference point for Bitcoin miners to facilitate transactions by authenticating the transaction itself, as well as validating Bitcoin authenticity and proof of ownership.

About Earn Money Online Hub
I am a Blogger making a full time income online since 2010 (read more about me). I invite you to read my HYIP reviews and Download The Beginners Guide To Online Investing to learn how to earn money investing online.