The Origin Of Bitcoin

The first Bitcoin came into existence via a block of encrypted computer data known as the ‚ÄúGenesis Block‚Äù on January 3, 2009 at 18:15:05 GMT. The first Bitcoin transaction occurred a little more than a week after the Genesis Block on January 12, 2009 and, according to computer security expert Hal Finny, was a test transaction whereby Finny received 10 BTC from Satoshi Nakamoto. 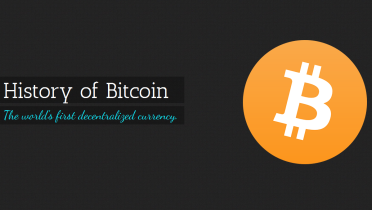 The identity of Satoshi Nakamoto and origin of the open-source C++ program is somewhat of a mystery. Mr. Finny says that Satoshi is a real person and that he was the lead developer of the Bitcoin protocol, until Nakamoto later handed the Bitcoin project over to Massachusetts-based programmer Gavin Andresen in 2010. According to Andresen:

Eventually, he pulled a fast one on me because he asked me if it‚Äôd be okay if he put my email address on the Bitcoin homepage, and I said yes, not realizing that when he put my email address there, he‚Äôd take his away. I was the person everyone would email when they wanted to know about Bitcoin. Satoshi started stepping back as leader of the project and pushing me forward as the leader of the project.
(huffingtonpost.com/2013/04/16/gavin-andresen-bitcoin_n_3093316.html)

The United States government may have created Bitcoin in anticipation that the dollar will eventually lose its place as the global reserve currency. So rather than letting the dollar fall to a foreign currency (such as the Yuan) the government created its own competitive currency. This theory is not entirely unfathomable, especially considering that the decline of the dollar has been steady (and therefore foreseeable) and Bitcoin has outperformed every world currency for a substantial period of time.

Graham acknowledges that his theories may sound far-fetched, but as he points out, so too is the idea that a mysterious individual created Bitcoin as a benevolent intellectual experiment. Others, including WikiLeaks founder Julian Assange, believe that Bitcoin was created by the ‚Äúcypherpunks,‚Äù a computer activist group that Assange is often associated with that advocates widespread use of digital cryptography as a route to social and political change.

About EarnMoneyOnlineHubber
I am a Blogger who likes to make money online. Previously I was working in a Software Company and I quit my job in February 2010. Since then I make my full time income online.